When it comes to communication, Capricorn and Aries will struggle. Aries exalts the pride of the sun and their attitude to be the first and the best at everything annoys Capricorn, because, like them, they are also highly competitive to be the best that they can be, both in their personal and professional endeavours.
And as natural born leaders, Capricorn always overlooks all things, and implementing rules or reprimanding someone as brutally temperamental, free-spirited, and impatient as Aries is a definite dilemma. More so, when it comes to emotional inclination, difference is still evident between the two.
Capricorn is very uncomfortable displaying any emotion to anyone. And even on the verge of fury, they will try to maintain an amiable appearance so as to salvage what is left in the relationship.
Aries, on the contrary, are clingy, and like being constantly showered by appreciation. It is one of their many ways to get attention and satisfaction of security in a relationship, and often they are left empty handed with Capricorn's insensitive ways to shrug them off.
Nonetheless, the relationship between Capricorn and Aries is something that can be progressive, if and only if, both hone their commitment to make adjustments and compromises.
Copyright 2008 Free Spiritual Guidance.com   Art Licensed by Shutterstock
This Page Was Last Updated On: 10/7/2021
1

The elements between Capricorn and Aries are discordant to each other making their relationship seem to be unlikely, but with vigorous effort and a whole lot of patience, fate can always turn the table.
Capricorn is influenced by earth making them practical, whereas Aries is fierce and unpredictable as fire. And the way that uncontained fire can intimidate and overpower anyone is the same way Aries can be uncontrollable and irrelevant to a fixed persona.
On the contrary, Aries must give Capricorn enough leeway with their dominance, concern, and restrictions. Rams full of pride must learn how to give in and appreciate what others are trying to do for them, because in the end, the success of their relationship is both their conscious effort to make things work, to abide to each other's rules, and constant adjustments despite their discordant elements. Through this, what seems to be negative will bounce back as positive in the end.
Astrological Personality and Compatibility Reports
I use Aries Daily Horoscopes, natal Personality Astrology Reports and Aries Compatibility Reports to help souls better understand who they are, and how they can improve their present relationships.
These are very detailed reports, and are done by souls donating their time and energy to help you attain your Spiritual Growth.  You are invited to request one, but we do require you be an active member of our weekly newsletter. 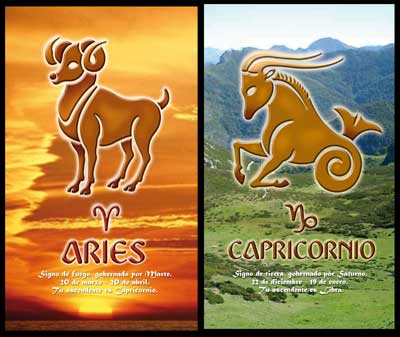 Capricorn and Aries, despite the odds, also share a few attributes they find blissful. To start with, Capricorn finds it overwhelming how Aries can bring variety to their relationship, provided that what they both want is in sync. Aries can introduce ways to break Capricorn's routines and new ways to make their responsibilities more light and interesting.
More so, Aries finds Capricorn's ability to see the bigger things in life as a complement to their confidence and controlling aspects where they love to steer situations from behind the scenes. Together, Capricorn's leadership and Aries fierce judgement to take action and be different can help both to accomplish great things.
Likewise, both exude a different level of optimism. Along with their enigmatic drive for excellence, Capricorn and Aries never do things half way. Giving up on something is a total failure. They either win or go home. And when failure does strike them, they will strive to come back stronger.
As they say, two opposite signs always attract each other, but along with it comes the reality that both will suffer from numerous differences. One of those is that both will quarrel over their finances. Capricorn is by far very meticulous and cautions where their hard-earned money goes to, whereas Aries can be greatly impulsive and has no regard or whatsoever when it comes to spending, only to satisfy their cravings for lavish things and grand experiences. Capricorn is traditionally practical, whereas Aries is simply moveable and spontaneous.
Fortunately, this issue poses a threat even at the beginning of their union, and will likely heighten once the two do settle for marriage.
More so, Capricorn and Aries build gaps by their emotional dissatisfaction from each other. Aries, gets satisfaction when they get attention and appreciation from their loved one, but things are not the same when Capricorn easily gets away by ignoring them.
What The Relationship Needs
The relationship between Capricorn and Aries starts like any romance, a fairytale, but their differences always bite them back to reality, that it requires hard work and constant effort for understanding and compromise to make their relationship work.
What this relationship needs is for both to realize that there is always hope despite their contradicting attributes. For one, Capricorn must learn to appreciate Aries positivity and enthusiasm to be the best that they can be, to explore and try new things, and to be carefree and bold. Because in the long run, they will be the ones who will save them from themselves, from times where they get too tightly wound with responsibilities, routines, ambitions, and work.
And when things get tough between them because of Aries' impulsiveness and impractical decisions, they must try to lengthen their patience instead of constantly battering their ram with reprimands. More so, it is not helpful that they distance themselves because their hands are full, instead they need to learn to balance things out to make their relationship healthier.
Aries
Compatibility
Learn the best relationship matches for your sign and find out which ones will be the most challenging for your soul as a tool to help you evolve and improve your relationship through advanced communication skills.
Most Compatible
Most Challenging